You should read the SWEB debugging tutorial before reading this tutorial on using (C)GDB with Thomas Malcher’s Lock Tree.

This is a little extension of gdb that records all function calls to Locks.
It is able to:

This tool uses the python API of gdb which is very powerful to analyze programs at runtime and script gdb . It creates breakpoints for acquiring and releasing a Lock (e.g. Mutex::acquire and Mutex::release). If one of these breakpoints gets hit during sweb execution the python code reads out the currentThread, the address of the Mutex object and its name_ attribute, the calling function etc. Then it continues the execution of sweb. For each thread it stores the recorded information in a graph called locktree.
So the program needs to run for a while so that the tool can record information about the locking behaviour of sweb.

A locktree is a graph representation of the locking behaviour of a thread. See the example on the right side. The root node of the tree specifies the thread, so in this case we are looking at the locking behaviour of a thread with name TxTConsoleThrd which is located at address 0x80136894 in SWEB.
All nodes below the root node represent Locks. The structure of the tree represents the locking order of the thread. In case of  TxTConsoleThrd for instance it first acquires the lock at address 0x80138b1c with the name_ attribute Terminal::mutex_ and afterwards the Lock with name Console::console_lock_. Release happens in the reverse order. Over all TxTConsoleThrd used three locks while we monitored it.

The git repository can be found here: https://github.com/tmalch/gdbLockTree

For most commands there exists a completion 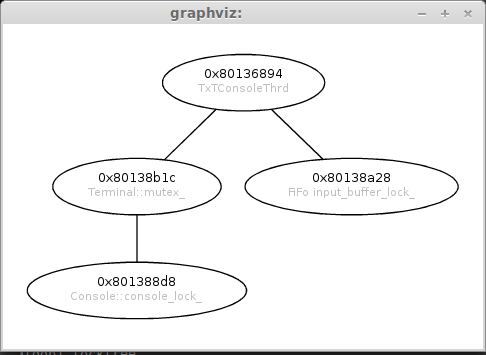 Which Locks does thread XY hold at a certain location in code?

I’m sure there are quite some so please send bug reports to malcher@student…
Also new ideas for commands are welcomed!

We may request cookies to be set on your device. We use cookies to let us know when you visit our websites, how you interact with us, to enrich your user experience, and to customize your relationship with our website.

Click on the different category headings to find out more. You can also change some of your preferences. Note that blocking some types of cookies may impact your experience on our websites and the services we are able to offer.

These cookies are strictly necessary to provide you with services available through our website and to use some of its features.

Because these cookies are strictly necessary to deliver the website, refuseing them will have impact how our site functions. You always can block or delete cookies by changing your browser settings and force blocking all cookies on this website. But this will always prompt you to accept/refuse cookies when revisiting our site.

We fully respect if you want to refuse cookies but to avoid asking you again and again kindly allow us to store a cookie for that. You are free to opt out any time or opt in for other cookies to get a better experience. If you refuse cookies we will remove all set cookies in our domain.

We provide you with a list of stored cookies on your computer in our domain so you can check what we stored. Due to security reasons we are not able to show or modify cookies from other domains. You can check these in your browser security settings.

These cookies collect information that is used either in aggregate form to help us understand how our website is being used or how effective our marketing campaigns are, or to help us customize our website and application for you in order to enhance your experience.

If you do not want that we track your visit to our site you can disable tracking in your browser here:

We also use different external services like Google Webfonts, Google Maps, and external Video providers. Since these providers may collect personal data like your IP address we allow you to block them here. Please be aware that this might heavily reduce the functionality and appearance of our site. Changes will take effect once you reload the page.

The following cookies are also needed - You can choose if you want to allow them: